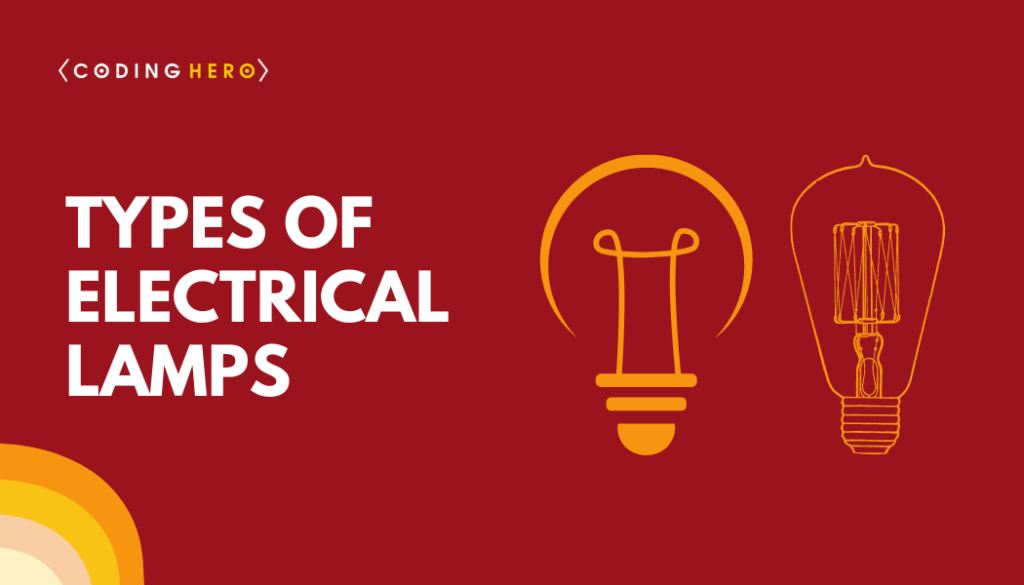 Electricity is one of the most important blessings that science has given to mankind. It has also become a part of modern life and one cannot think of a world without it. Electricity has many uses in our day-to-day life. It is used for lighting rooms, working fans, and domestic appliances like using electric stoves, A/C, and more. But the most visible and common use of electricity is in lighting.

The different types of lamps include:

Incandescent bulbs are manufactured in a wide range of sizes, light output, and voltage ratings, from 1.5 volts to about 300 volts. They require no external regulating equipment, have low manufacturing costs, and work equally well on either alternating current or direct current. As a result, the incandescent bulb became widely used in household and commercial lighting, for portable lightings such as table lamps, car headlamps, and flashlights, and for decorative and advertising lighting.

The third type of lamp is a fluorescent lamp. A fluorescent lamp, or fluorescent tube, is a low-pressure mercury-vapour gas-discharge lamp that uses fluorescence to produce visible light. An electric current in the gas excites mercury vapour, which produces short-wave ultraviolet light that then causes a phosphor coating on the inside of the lamp to glow. A fluorescent lamp converts electrical energy into useful light much more efficiently than an incandescent lamp.

Fluorescent lamp fixtures are more costly than incandescent lamps because, among other things, they require a ballast to regulate current through the lamp, but the initial cost is offset by a much lower running cost.

Compared to general-service incandescent lamps giving the same amount of visible light, CFLs use one-fifth to one-third the electric power, and last eight to fifteen times longer. A CFL has a higher purchase price than an incandescent lamp, but can save over five times its purchase price in electricity costs over the lamp’s lifetime.

Like all fluorescent lamps, CFLs contain toxic mercury, which complicates their disposal. In many countries, governments have banned the disposal of CFLs together with regular garbage. These countries have established special collection systems for CFLs and other hazardous waste.

A mercury-vapour lamp is a gas-discharge lamp that uses an electric arc through vapourized mercury to produce light. The arc discharge is generally confined to a small fused quartz arc tube mounted within a larger borosilicate glass bulb. The outer bulb may be clear or coated with a phosphor; in either case, the outer bulb provides thermal insulation, protection from the ultraviolet radiation the light produces, and a convenient mounting for the fused quartz arc tube.

Mercury vapour lamps are more energy efficient than incandescent and most fluorescent lights, with luminous efficacies of 35 to 65 lumens/watt. Their other advantages are a long bulb lifetime in the range of 24,000 hours and a high-intensity, clear white light output. For these reasons, they are used for large-area overhead lighting, such as in factories, warehouses, and sports arenas as well as for streetlights. Clear mercury lamps produce white light with a bluish-green tint due to mercury’s combination of spectral lines.

A metal-halide lamp is an electrical lamp that produces light by an electric arc through a gaseous mixture of vapourized mercury and metal halides (compounds of metals with bromine or iodine). It is a type of high-intensity discharge (HID) gas discharge lamp.

Developed in the 1960s, they are similar to mercury vapour lamps, but contain additional metal halide compounds in the quartz arc tube, which improve the efficiency and color rendition of the light. The most common metal halide compound used is sodium iodide. Once the arc tube reaches its running temperature, the sodium dissociates from the iodine, adding orange and reds to the lamp’s spectrum from the sodium D line as the metal ionizes.

As a result, metal-halide lamps have a high luminous efficacy of around 75–100 lumens per watt, which is about twice that of mercury vapour lights and 3 to 5 times that of incandescent lights, and produce intense white light. Lamp life is 6,000 to 15,000 hours.

The next two categories come under the category of sodium-vapour lamp. A sodium-vapour lamp is a gas-discharge lamp that uses sodium in an excited state to produce light at a characteristic wavelength near 589 nm.

High-pressure sodium (HPS) lamps have been widely used in industrial lighting, especially in large manufacturing facilities, and are commonly used as plant grow lights. They contain mercury. They have also been widely used for outdoor area lightings, such as on roadways, parking lots, and security areas. Understanding the change in human color vision sensitivity from photopic to mesopic and scotopic is essential for proper planning when designing lighting for roadways.

High-pressure sodium lamps are quite efficient — about 100 lumens per watt, when measured for photopic lighting conditions. Some higher-power lamps (e.g. 600 watts) have efficacies of about 150 lumens per watt.

Low-pressure sodium (LPS) lamps have a borosilicate glass gas discharge tube (arc tube) containing solid sodium and a small amount of neon and argon gas in a Penning mixture to start the gas discharge. The discharge tube may be linear (SLI lamp) or U-shaped.

When the lamp is first started, it emits a dim red/pink light to warm the sodium metal; within a few minutes as the sodium metal vapourizes, the emission becomes the common bright yellow. These lamps produce a virtually monochromatic light averaging a 589.3 nm wavelength (actually two dominant spectral lines very close together at 589.0 and 589.6 nm). The colors of objects illuminated by only this narrow bandwidth are difficult to distinguish.

LPS lamps have an outer glass vacuum envelope around the inner discharge tube for thermal insulation, which improves their efficiency. Earlier LPS lamps had a detachable dewar jacket (SO lamps). Lamps with a permanent vacuum envelope (SOI lamps) were developed to improve thermal insulation. Further improvement was attained by coating the glass envelope with an infrared reflecting layer of indium tin oxide, resulting in SOX lamps.

LPS lamps are among the most efficient electrical light sources when measured in photopic lighting conditions, producing above 100 and up to 206 lm/W. This high efficiency is partly due to the light emitted being at a wavelength near the peak sensitivity of the human eye. They are used mainly for outdoor lighting (such as street lights and security lighting) where faithful color rendition is not important. Recent studies show that under typical nighttime mesopic driving conditions, whiter light can provide better results at a lower level of illumination.

The last type of lamp on our list is a LED lamp. LED stands for light emitting diode. LED lighting products produce light up to 90% more efficiently than incandescent light bulbs. An electrical current passes through a microchip, which illuminates the tiny light sources we call LEDs and the result is visible light. To prevent performance issues, the heat LEDs produce is absorbed into a heat sink.

LEDs are “directional” light sources, which means they emit light in a specific direction, unlike incandescent and CFL, which emit light and heat in all directions. That means LEDs are able to use light and energy more efficiently in a multitude of applications.

Common LED colors include amber, red, green, and blue. To produce white light, different color LEDs are combined or covered with a phosphor material that converts the color of the light to a familiar “white” light used in homes. Phosphor is a yellowish material that covers some LEDs. Colored LEDs are widely used as signal lights and indicator lights, like the power button on a computer.

The grouping of these various types of lamps has been illustrated in the diagram below:

What are the different types of lamps?

What is the most common type of lamp?

The most common lamps are incandescent lamps. These are the most commonly used type of bulb and are usually the least expensive. They emit a warm light, can be used with dimmers, and usually last up to a year – longer than halogen lightbulbs, but not as long as CFL or LED lightbulbs. They are also not as energy-efficient as other lightbulb types.

An electric light, lamp, or light bulb is an electrical component that produces light. It is the most common form of artificial lighting. Lamps usually have a base made of ceramic, metal, glass, or plastic, which secures the lamp in the socket of a light fixture. There are various types of lamps available in the market such as Incandescent, Halogen, Fluorescent, CFL, Mercury Vapour, Metal-Halide, HPSV, LPSV, and LED lamps.