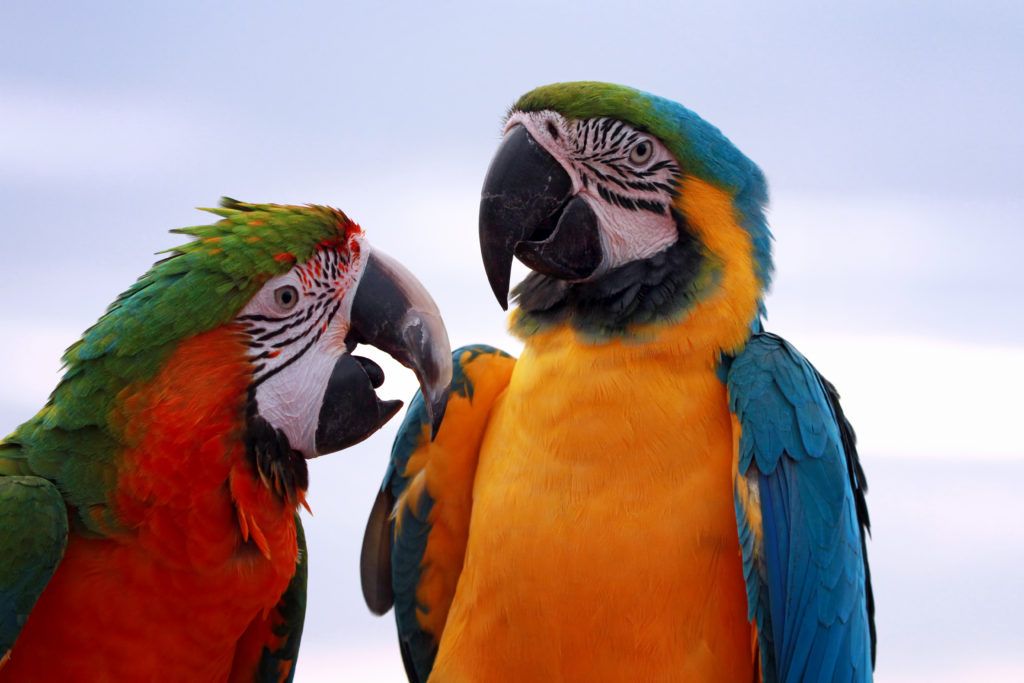 Most of us are aware of the fact that parrots are especially adept at mimicking sounds and human language. Did you know that there are many other birds who are good at mimicking sounds of other animals and objects. In this article we bring you these talking birds – birds that mimic.

How Can Some Birds Talk?

To understand the mechanism as to how some of the birds talk, let’s look at the these two mechanisms involved:

The reason the birds can imitate sounds that we need our lips or teeth to form is that their syrinx is much more flexible than our larynx. The two sides of the syrinx can actually be vibrated separately, allowing them to accurately copy pitch, volume and word formation down to a point where they can even reproduce different human accents.

Syrinx, vocal organ of birds, located at the base of the windpipe (trachea), where the trachea divides into the bronchi (tubes that connect the trachea with the lungs). Sound vibrations in the tracheal air column are evidently initiated and modulated by the vibrating membranes, specialized parts of the bronchial or tracheal walls. Songbirds, and probably other birds, are able to control the right and left halves of the syrinx separately, thus singing with two independent voices.

Here is a list of birds that can mimic sounds of other animals and objects:

Considered one of the most intelligent bird species, American Crows have even been known to show interest in different languages. Some bird experts posit that the crow’s ability to mimic human voices is rivaled only by the parrot, and that crows might even be more vocal if they were kept as pets as often.

The Blue Jay vocalization most often considered a song is the “whisper song,” a soft, quiet conglomeration of clicks, chucks, whirrs, whines, liquid notes, and elements of other calls; a singing bout may last longer than 2 minutes. Blue Jays make a large variety of calls. The most often heard is a loud jeer, Also makes clear whistled notes and gurgling sounds.

Blue Jays frequently mimic hawks, especially Red-shouldered Hawks. Blue Jays may snap their bills in intense aggressive displays. When caught in a trap or when nestlings are taken from a nest, may hammer beak loudly on perch.

Male Gray Catbirds sing a long, halting series of short notes collected into “phrases,” which combine to make a song. One whole song can last many minutes. Sounds include whistles, squeaks, gurgles, whines, and nasal tones. The notes often are imitations of other birds as well as of frogs and mechanical sounds. The series of sounds is random, but certain notes are often repeated.

While mockingbirds tend to repeat phrases three or more times, and Brown Thrashers typically sing phrases twice before moving on, Catbirds usually don’t repeat phrases. Females sing infrequently, and when they do, their songs are sung more quietly. The most common call is a raspy meow that sounds like a cat. Catbirds also make a loud, chattering chek-chek-chek and a quiet quirt.

Both male and female mockingbirds sing. They often mimic the sounds of birds (and frogs) around them, including shrikes, blackbirds, orioles, killdeer, jays, hawks, and many others. They go on learning new sounds throughout their lives. The song is a long series of phrases, with each phrase repeated 2-6 times before shifting to a new sound; the songs can go on for 20 seconds or more. Many of the phrases are whistled, but mockingbirds also make sharp rasps, scolds, and trills.

Parrots have an incredible ability to repeat human speech which makes them truly unique among other types of companion pets. You are likely to find, though, that the birds’ talents for mimicry still pales in comparison to the fact that they are charming, engaging, and truly remarkable which is why they have been so popular for generations. There are many varieties of parrots that are famous for their talking and mimicry abilities.

The plain-looking, yellow-eyed Sage Thrasher is sometimes called the “mountain mockingbird” due to its song — a long, melodious jumble of musical notes and phrases reminiscent of the widespread Northern Mockingbird. This lively song inspired American ornithologist A.C. Bent to dub the Sage Thrasher “the poet of the lonesome sagebrush plain.”

True to its scientific name, Oreoscoptes montanus (“mimic of the mountains”), the Sage Thrasher imitates other birds that share its habitat, including Western Meadowlark, Brewer’s Sparrow, and Horned Lark. In fact, genetic studies by ornithologists Charles Sibley and Jon Ahlquist show that this smallest North American thrasher species may be more closely related to the mockingbird family than to other thrashers.

Males have a large repertoire of songs made up of whistles, cackles, mews, catcalls, caw notes, chuckles, rattles, squawks, gurgles, and pops, which they repeat and string together with great variety. Songs of Western birds may be higher in pitch and more rapid than those of eastern birds. They sing in morning and evening (and even at night during the height of the breeding season), either concealed in thickets or exposed on prominent perches within their breeding territories.

They have a variety of calls, including a distinctive harsh scolding. Females also make a gargling growl when disturbed at the nest. Wintering males and females give a “chuck” call to defend winter territories. Males produce a hollow, thumping sound during display flights, probably made with their wings. Females may also make this sound while flying, and may clap their bills with a soft, snapping sound when at the nest.

Table of Contents Best Sci Fi Movies for Kids1. Aliens in the END_OF_DOCUMENT_TOKEN_TO_BE_REPLACED