In mathematics, there is one subfield called recreational mathematics which is meant for recreation. It is designed for entertainment rather than rigorous study and application-based professional activity or part of a student’s formal education. This field of mathematics contains maths puzzles and games, such as magic squares that are often attractive to kids. Also, it helps in motivating their further study of the subject.

Magic Squares are square grids with a special arrangement of numbers in them. These numbers are special because every row, column, and diagonal adds up to the same number. So for the example below, 15 is the magic number. Could you work this out just from knowing that the square uses the numbers from 1 to 9?

Why Are They Called Magic?

So the numbers in the Magic Square are special, but why are they called magic? It seems that from ancient times they were connected with the supernatural and magical world. The earliest record of magic squares is from China in about 2200 BC. and is called “Lo-Shu“.

Legends dating from as early as 650 BCE tell the story of the Lo Shu (洛書) or “scroll of the river Lo”. According to the legend, there was a huge flood in ancient China. While the great king Yu was trying to channel the water out to sea, a turtle emerged from it with a curious pattern on its shell: a 3×3 grid in which circular dots of numbers were arranged, such that the sum of the numbers in each row, column and diagonal was the same: 15.

The black knots show even numbers and the white knots show odd numbers. Look closely and you’ll see that this ancient magic square is the same as our example above. Magic squares were first mentioned in the Western world in the work of Theon of Smyrna. They were also used by Arab astrologers in the 9th century to help work out horoscopes. The work of the Greek mathematician Moschopoulos in 1300 A.D. helped to spread knowledge about magic squares. So here we are now, more than 700 years later, and teachers are using them in class for problem-solving and practicing addition.

To solve these types of magic squares you might use the trial and error method, which takes a  lot of time. We bring you a 3×3 magic square solver to solve such magic squares quickly and easily. Let’s look at the two very interesting ways of solving such problems.

Here each alphabet represents a number.

Now, fill the square with alphabets in a clockwise direction starting from the top left.

Next, replace the alphabets with their corresponding numbers.

Let’s now consider one more example of filling numbers from 12 to 20 in a similar magic square.

Designate each number with alphabets from A to I.

Now, fill the square with alphabets in a clockwise direction starting from the top left.

Next, replace the alphabets with their corresponding numbers.

Let’s check the sum of numbers:

In our second magic square solver trick, you’ve to remember a pattern. To solve any 3 by 3 magic square remember the following pattern:

And now fill the numbers from lowest to largest following the lines in the above pattern.

Using these tricks you can solve any 3 x 3 magic square with any sequence of 9 consecutive numbers.

What is a magic square in math?

Magic Squares are square grids with a special arrangement of numbers in them. These numbers are special because every row, column, and diagonal adds up to the same number.

Is there a trick to magic squares? 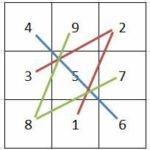 Yes, there is a trick to solving magic squares. Just remember the pattern in the image on the right and fill in the given numbers.

Solving these types of problems and playing chess help kids improve their analytical and logical thinking. Do you know any other trick for solving such magic squares? Don’t forget to share it with us.

Table of Contents Best Sci Fi Movies for Kids1. Aliens in the END_OF_DOCUMENT_TOKEN_TO_BE_REPLACED