How to Make a Bar Graph – Definition, Advantages & Examples A graphical representation is a visual display of data and statistical results. It is more effective than presenting the data in the form of tables. There are many ways to represent the data graphically such as bar graph, double bar graph, pictograph, line graph, linear graph, histogram, pie chart, etc.

A bar chart or bar graph is a chart or graph that presents the data with rectangular bars with heights or lengths proportional to the values that they represent. For example, if you want to present information on sales of cars during a period, you draw rectangles of the same width and height corresponding to the numbers representing the sales figures.

Let’s understand what is a bar graph and how is it read and how to make a bar graph using examples.

What is a Bar Graph?

A bar graph or a bar chart is a pictorial representation of grouped data. A bar graph shows the data with rectangular bars of the same width and the heights proportional to the values that they represent. The bars in the graph can be shown vertically or horizontally.

A bar graph is an excellent tool to represent data that are independent of one another and that do not need to be in any specific order while being represented. The bars give a visual display for comparing quantities in different categories.

The bar graphs have two lines, horizontal and vertical axis, also called the $x$ and $y$-axis along with the title, labels, and scale range.

Let’s consider an example of how does a bar graph looks like.

The rectangular bars drawn of the same width represent the sales of cars during the year corresponding to the bars. The length (or height) of each of the bars corresponds to the value(or the number of cars sold) during a year.

Let’s consider another example of the number of games played by tennis players in a particular year.

The only difference between these two bar graphs is that the first one is a vertical bar graph and the second one is a horizontal bar graph.

Bar Graphs are broadly classified into two types depending on the orientation of the bars(rectangles):

The bars in bar graphs can be plotted horizontally or vertically, but the most commonly used bar graph is the vertical bar graph. Either of these two categories can be of the following two types.

Horizontal bar graphs are bar graphs where data is represented horizontally in a graph or chart with the help of rectangular bars that show the measure of data. In this type, the variables or the categories of the data have to be written and then the rectangular bars are horizontally drawn on the y-axis and the x-axis shows the length of the bars equal to the values of different variables present in the data.

The grouped bar graph(or clustered bar graph) is used to show the discrete value for two or more categorical data. In this, rectangular bars are grouped by position for levels of one categorical variable, with the same colors showing the secondary category level within each group. It can be shown both vertically and horizontally.

These are some properties that make a bar graph unique and different from other types of graphs.

These are the advantages of bar graphs over the other types of graphs.

How to Read a Bar Graph

The different steps to read a bar graph are given below:

Step 2: In the case of a vertical bar graph, the categories are present on the horizontal axis (or x-axis) and the data values are represented by the vertical bars(or rectangles).

In the case of a horizontal bar graph, the categories are present on the vertical axis (or y-axis) and the data values are represented by the horizontal bars(or rectangles).

Step 3: For each category,

Let’s consider an example to understand how a bar graph is read.

Ex 1: Observe the bar graph and answer the following questions

The longest bar(or rectangle) corresponds to the year 2008. Therefore, the maximum number of trees planted in the year 2008, and was 300.

The smallest bar(or rectangle) corresponds to the year 2009. Therefore, the minimum number of trees planted in the year 2009, and was 100.

The number of trees planted each year is

How to Make a Bar Graph

The different steps to make a bar graph are given below:

Step 1: First, decide the title of the bar graph.

Step 4: Write the names on the horizontal axis, such as Apple, Mango, Pineapple, Orange, and Grapes.

Step 5: Now, label the vertical axis. (For example, the Number of Students)

Step 6: Finalise the scale range for the given data.

Step 7: Finally, draw the bar graph that should represent each category of the fruit with their respective numbers.

Let’s consider an example to understand how a bar graph is drawn for the given data.

Ex 1: A group of students was asked about their favourite activities. The following table shows the data regarding the hobbies of the students. Draw a bar graph to represent the given data.

The first step is deciding the title of the bar graph. Let’s name our bar graph “Favourite Activities of Students”.

Next, draw the axes.

To choose an appropriate scale, note down the minimum and maximum values in the data set.

Since the maximum value is 30 and the minimum 5, so let’s mark the maximum point on the vertical axis as 35 starting from 0 with equal intervals of 5. This will fit all the values properly in the bar graph.

Finally, draw the bar graph that should represent each category of the activity with their respective numbers.

Draw a bar graph for the given data

The number of students studying in each of the five classes of a school is given below. Draw a bar graph to represent the numerical data.

From a pond, the following numbers of fish were caught on different days. Draw the bar graph of it.

What is a bar graph explain with an example. 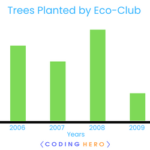 A bar graph can be defined as a graphical representation of data, quantities, or numbers using bars or strips. They are used to compare and contrast different types of data, frequencies, or other measures of distinct categories of data. For example, the graph on the right shows the number of trees planted by eco-club during the years 2005 – 2010.

What is the difference between a bar graph and a histogram?

How do you represent a bar graph?

A bar graph shows the data with rectangular bars of the same width and the heights proportional to the values that they represent. The bars in the graph can be shown vertically or horizontally. These are very helpful in displaying relative numbers or proportions of multiple categories.