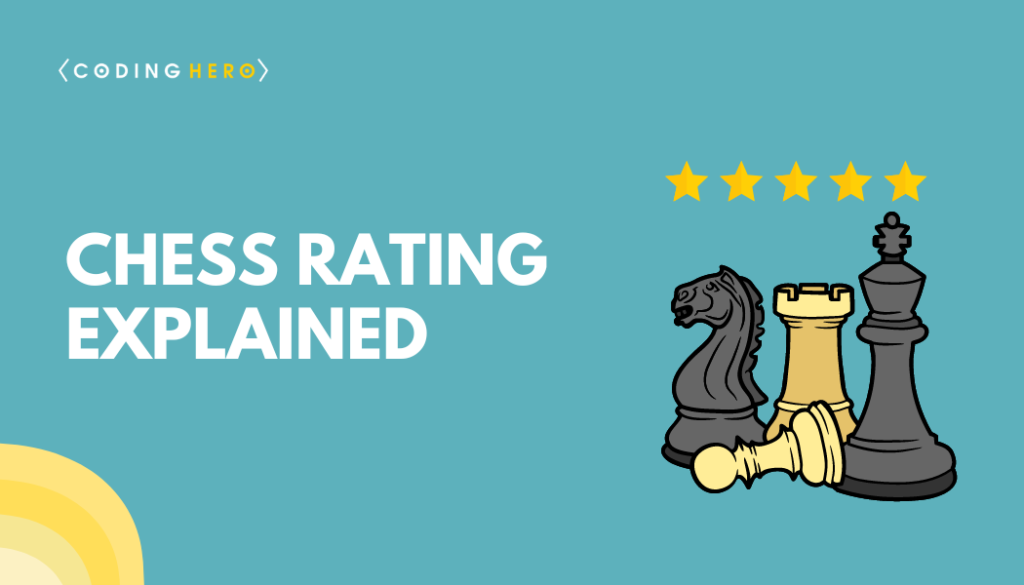 What is chess rating and how is it calculated? All the chess players want to know what their chess rating is. These ratings help in determining the chess ranking of a player and are most widely used to analyze the performance of a chess player.

What is a Chess Rating?

Chess Ratings are numbers used to represent a player’s playing strength. Ratings allow players to compare themselves to their peers. There are many types of chess ratings. Most rating systems are based on the work of Arpad Elo, a physics professor and chess master, who invented the system and now one is named after him.

The workings of chess rating systems are generally quite complex, but they are based on one simple concept

Ratings vary depending on who is issuing them. Consider the following example of United States Chess Federation (USCF) ratings

A Chess Rating is a number typically ranging from 400-2000+.  It is an estimate of a person’s tournament playing strength. You receive a rating after playing in a rated tournament once your name is entered into the database of players. The number will go up or down depending on how well you do against other rated players. Here is a list of sample ratings and how they typically correlate to chess skills:

Ratings of top 25 chess Grandmasters as on June 2022

Classical vs Rapid vs Blitz Game

There are basically three types – Classical, Rapid and Blitz.

Classical chess games are defined by the International Chess body FIDE as being chess games where each player’s thinking time is at least 60 minutes.

There are various ways Tournaments and Leagues determine their time control:

Rapid-play is defined as being a game where players’ thinking time is more than ten minutes but less than 60. Some tournaments now have games where the players have 25 minutes each to start with, with an increment of say 5 seconds a move: these games do not usually go beyond one hour in all.

Blitz is where all moves are played in 10 minutes or less each per player. If a game time is under 3 minutes, that is defined as Bullet.

General Range of Ratings – Is 1500 a Good Chess Rating?

Prestigious titles are available to the strongest players. These titles are usually awarded partially or entirely based on ratings.

How Do Wins, Draws, and Losses Affect Your Rating?

The rating of a player’s opponents also affects how that player’s rating will change.

How do You “Earn” Chess Ratings – Chess Calculator?

A player can earn ratings in many ways. By playing in sanctioned tournaments, a player can get officially ranked by a national chess federation like USCF or FIDE. After each tournament, the results are sent to the federation rating the event, where they are processed and updated.

Once a player’s rating is established, it can fluctuate anywhere between 0-60 points after each rated game. In case of a draw, the change in ratings ranges from (0-30). To get a general idea, you can refer to the table below.

Following are the different types of chess ratings

This was created and published by Anton Hoesslinger in 1948. It was used from 1948 until 1992 by the West German Chess Federation, replaced by Deutsche Wertungszahl, an Elo-based system.

It has influenced other rating systems. This is where the players’ ratings are the benchmark rating of the tournament, and one point will be deducted for each percentage point above 50 that they got from the competition. Unlike the other rating systems, the lower the rating, the better the player it indicates.

Kenneth Harkness was the man behind the Harkness System which was made in 1956. It was used from 1950 to 1960 by UCSF and by other organizations.

The Elo rating system is a method for calculating the relative skill levels of players in zero-sum games such as chess. It is named after its creator Arpad Elo, a Hungarian-American physics professor.

The Elo system was originally invented as an improved chess-rating system over the previously used Harkness system but is also used as a rating system in association football, American football, baseball, basketball, pool, table tennis, Go, board games such as Scrabble and Diplomacy, and esports.

This means that this rating system is self-correcting. Players whose ratings are too low or too high should, in the long run, do better or worse correspondingly than the rating system predicts and thus gain or lose rating points until the ratings reflect their true playing strength.

Elo ratings are comparative only and are valid only within the rating pool in which they were calculated, rather than being an absolute measure of a player’s strength.

The formula used for finding the rating is

Based on their Elo ratings the players are categorized as:

The first step is to compute the transformed rating for each player or team:

This is just to simplify further computations. In the second step we calculate the expected score for each player:

Now we wait for the match to finish and set the actual score in the third step:

Now we can put it all together and in a fourth step find out the updated Elo-rating for each player:

K-factor is basically a measure of how strong a match will impact the players’ ratings. If you set K too low the ratings will hardly be impacted by the matches and very stable ratings (too stable) will occur. On the other hand, if you set it too high, the ratings will fluctuate wildly according to the current performance. Different organizations use different K-factors, and there’s no universally accepted value. In chess, the ICC uses a value of K = 32.

The United States Chess Federation (also known as US Chess or USCF) is the governing body for chess competitions in the United States and represents the U.S. in FIDE, the World Chess Federation. US Chess administers the official national rating system, awards national titles, and sanctions over twenty national championships annually, and publishes two magazines: Chess Life and Chess Life for Kids.

The USCF was founded and incorporated in Illinois in 1939, from the merger of two older chess organizations. It is a 501(c) non-profit organization headquartered in Crossville, Tennessee. Its membership as of 2020 is over 93,000.

These are the USCF ratings and their corresponding categories:

This system of rating was invented by Mark E. Glickman as a modification to the Elo system. The Glicko-2 system is an improvement and is being used by the Australian Chess Federation and most online chess gaming sites.

This is a more modern way that builds on the above concepts but uses a way more complicated formula. This makes sense as computers can now help with the computation, unlike the Elo method, which is using paper.

The DWZ is similar to the Elo rating system of the FIDE but was enhanced further over the years. In development, the experiences of the Ingo-System and the NWZ-System were respected. The scale goes from about 500 (beginners) to over 2800 (world champions), but is, in theory, open at the top and bottom.

In contrast to the Ingo System, a higher DWZ represents a better playing ability. The DWZ consists of an evaluation number as a measurement of the playing ability and an index number that is separated from that by a “-” sign. For players who do not have a DWZ, but have a FIDE-ELO, the FIDE-ELO is used, marked with the index 6, and resumed as DWZ. For players who neither have a DWZ nor a FIDE-ELO, but have a national evaluation number, this number is used and translated if necessary. In this case, the index is set to zero.

Chessmetrics, created by Jeff Sonas, is based on computer analysis of a large database of chess games and is meant to be more exact and precise than the Elo System.

The formula used for this type of rating system is as follows:

Performance rating adjustment after the tournament:

The weighting of past tournaments (age in months):

There have been debates and criticisms regarding this rating system as the formula or calculation only measures the player’s success in competition alone and not the quality of the game played.

The unique thing about the URS or Universal Rating System is that it incorporates both slow and fast plays which gives more accurate data on a chess player’s overall ability and strength, which is quite impressive.

What do FIDE and Elo mean?

It’s a French acronym pronounced as “fee day“, for the Fédération Internationale des Échecs or World Chess Federation is an international organization that connects the various national chess federations around the world and acts as the governing body of international chess competition.
Elo is not an abbreviated form. It is named after its creator Arpad Elo, a Hungarian-American physics professor.

What are live ratings?

Live ratings are daily updates of the chess ratings of top players. Usually, such ratings are updated within 1 minute of a game finishing, if it is played in a top tournament. Live Ratings are based on official ratings (FIDE ratings) which are updated once a month.

What is the average chess rating?

There’s no such thing as an “average” chess rating, but a solid club-level chess player might be rated somewhere around 1500 – 1700.

What is the highest-ever chess rating?

What is a good chess rating?

Any rating above 1600 is considered good. 1600 generally represents a strong player. 2000 is an excellent player.

We hope you enjoyed the article about what is chess rating and how it is calculated. If you are looking for similar articles to read, then we would also recommend you to read our following articles.

Any rating above 1600 is considered good. 1600 generally represents a strong player. 2000 is an excellent player.

their career and  for a Grandmaster a live rating of at least 2500 Elo is the minimum requirement.