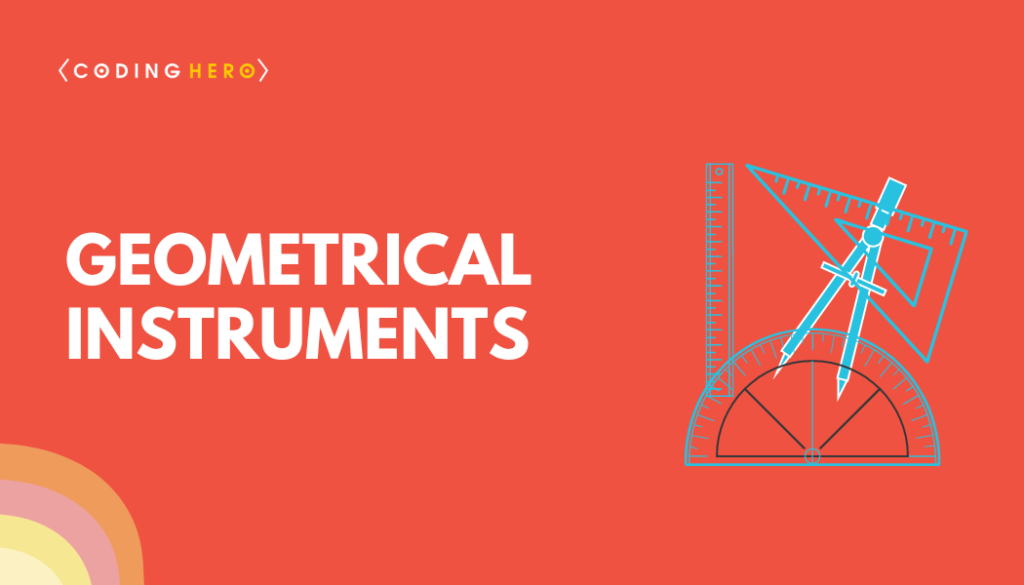 We come across a number of shapes in our day-to-day life. You are already aware of a couple of them such as triangles, squares, hexagons, circles, parallelograms, and so on. The branch of Maths that studies these shapes is called Geometry. In Maths, practical geometry is the most crucial topic, where we learn about the shapes of objects and how to draw them.

Be it the Eiffel Tower in Paris or the beautiful Taj Mahal in India, all these astounding monuments are a miracle of geometry. Not only man-made works but the beauty of geometry could be found in mother nature herself!

What are Geometrical Instruments?

The early geometers studied figures such as points, lines, and angles which required the use of rulers and compasses only. With the advent of more geometric designs, other geometric tools were invented. Some of the most commonly used geometric tools are:

Now, let us discuss the different Maths tools with their description and uses in detail.

It is a ‘V-shaped tool that holds a pencil on one side of the ‘V’ and a pointer on the other side. The distance between the pencil and the pointer is adjustable. It is used to trace arcs, circles, and angles. It is also used to mark equal lengths. A compass is one of the mathematical tools which is used to draw a geometrical figure, such as a circle. It is also used in the intersection of line segments and tools, which is used to intersect the line segment and helps to find the midpoint of the shapes.

When we need to draw some angle then we use the geometrical tool known as a protractor. The protractor scale is graduated in degrees. Thus, it can also be used to measure any unknown angle. Generally, a protractor consists of a graduation scale from 0 degrees to 180 degrees. But it can also consist of a whole 360 degrees of graduations, that is, a full circle.

It looks similar to the compasses with its V-shaped structure. However, it has pointers on both ends of the ‘V’. The distance between them is adjustable and it is used to measure and compare lengths.

Now, if we need to draw a parallel line or even a perpendicular line then we can use a set square. To talk about the structure of a set square has a body that is usually made up of plastic. It is triangular and consists of graduations that can vary. There are usually two types of set squares.

With the help of tools, we can enhance our ability to do certain things and help us in accomplishing certain projects which would be otherwise, nearly impossible to achieve. To do a job we may need more than a single type of tool. In fact, more than often it is possible that that might require more than one type of tool. In order to draw the various types of geometrical shapes, we require various tools. To draw the shapes of practical geometry we require tools like a ruler, a compass, a protractor, set squares, roller scales, and a divider, known as geometrical tools.

In the early days, the mathematicians who used to study the various geometrical shapes and sizes used simple geometrical tools like a ruler and a compass. With more and more knowledge and the increasing need for new structural designs, a greater number of geometrical tools were incorporated in the field of geometry.

What are Geometric Tools in Maths?

Geometric tools are those instruments that are used to construct different types of geometric shapes and figures. In Euclidean geometry, all the shapes, lines, and angles are drawn using geometric tools.

What are the 2 most important Euclidean tools used in Geometric construction?

The two most important Euclidean tools used by early Greeks to construct different geometrical shapes and angles were a compass and a straightedge. Using these two tools, almost any shape can be constructed. Later, rulers and protectors were invented which made construction easier.

What are the most common instruments in a geometry box?

The most common tools in a student geometric box are:
a. Compass
b. Ruler
c. Protractor
d. Divider
e. Set-squares

What is the use of a ruler in Geometry?

In Geometry, a ruler is used to draw straight lines. Rulers are also used to measure the length of the object.

Why do we use protractors in Maths?