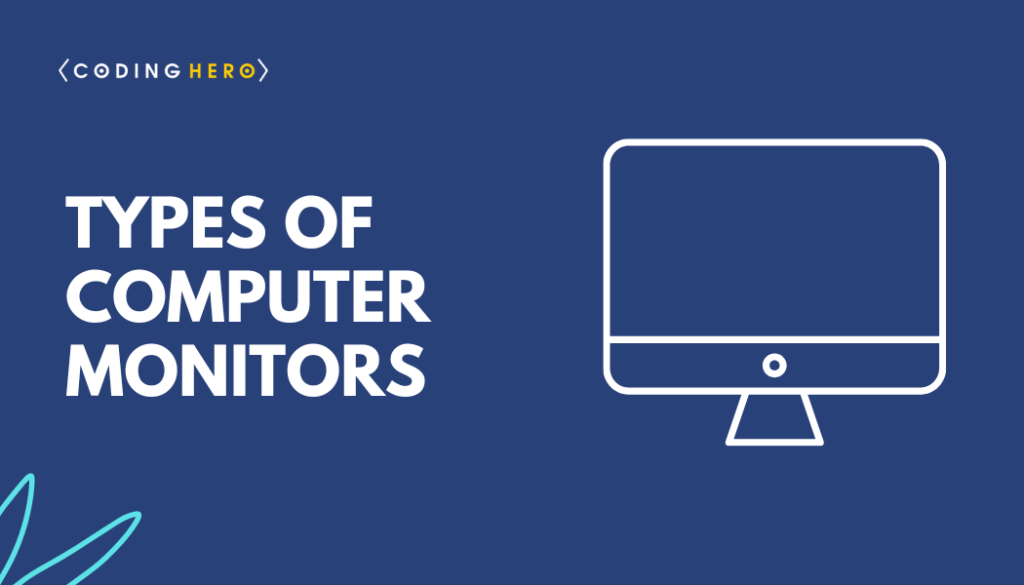 The term “monitor” is often used synonymously with “computer screen” or “display.” The monitor displays the computer’s user interface and opens programs, allowing the user to interact with the computer, typically using the keyboard and mouse. Most people use computer monitors daily at work and at home. There are various types of monitor. These come in a variety of shapes, designs, and colors.

A monitor is an electronic output device that is also known as a video display terminal (VDT) or a video display unit (VDU). It is used to display images, text, video, and graphics information generated by a connected computer via a computer’s video card. Although it is almost like a TV, its resolution is much higher than a TV.

Older monitors were built by using a fluorescent screen and Cathode Ray Tube (CRT), which made them heavy and large in size and thus causing them to cover more space on the desk. Nowadays, all monitors are made up by using flat-panel display technology, commonly backlit with LEDs. These modern monitors take up less space on the desk as compared to older CRT displays.

The first on the list of types of monitors is CRT. A CRT monitor is one of the oldest types of monitor. It contains millions of tiny red, green, and blue phosphor dots that glow when struck by an electron beam that travels across the screen to create a visible image. The illustration below shows how this works inside a CRT.

In a cathode ray tube, the “cathode” is a heated filament. The heated filament is in a vacuum created inside a glass “tube.” The “ray” is a stream of electrons generated by an electron gun that naturally pours off a heated cathode into the vacuum. Electrons are negative. The anode is positive, so it attracts the electrons pouring off the cathode. This screen is coated with phosphor, an organic material that glows when struck by the electron beam.

The second on the list of type of monitor is LCD. An LCD monitor is one of the types of monitor that gained popularity with the use of laptops. A liquid crystal display (LCD) monitor is a computer monitor or display that uses LCD technology to show clear images and is found mostly in laptop computers and flat-panel monitors.

This technology has replaced the traditional cathode ray tube (CRT) monitors, which were the previous standard and once were considered to have better picture quality than early LCD variants.

With the introduction of better LCD technology and its continuous improvement, LCD is now the clear leader over CRT, in terms of color and picture quality, not to mention capabilities for large resolutions. Also, LCD monitors may be made much more cheaply than CRT monitors.

The next on the list of types of monitors is TFT. A TFT monitor uses thin-film transistor technology in an LCD. LCD monitors, also called flat panel displays, are replacing the old-style cathode ray tubes (CRTs) in both televisions and computer displays. Nearly all LCD monitors today use TFT technology.

The benefit of thin-film transistor technology is the separate, tiny transistor for each pixel on the display. Because each transistor is so small, the amount of charge needed to control it is also small. This allows the screen to refresh very quickly, as the image is re-painted or refreshed several times per second.

Before TFT, passive matrix LCDs could not keep up with fast-moving images. A mouse dragged across the screen, for example, from point A to point B, would disappear between the two points. A TFT monitor can track the mouse, resulting in a display that can be used for video, gaming, and all forms of multimedia.

A 17-inch TFT monitor has about 1.3 million pixels and 1.3 million transistors. That leaves a significant chance for a malfunctioning transistor or two on the panel, and “dead pixels” are not uncommon.

A dead pixel is a pixel whose transistor has failed, thereby creating no display image so on a solid black background, for example, dead pixels will stand out as tiny dots of red, white, or blue. Most manufacturers will not replace a monitor that has fewer than 11 dead pixels. Many don’t have any dead pixels, although even in those that do, they are not noticeable unless they are located in a critical position on the screen.

LED Display (light-emitting diode display) is a screen display technology that uses a panel of LEDs as the light source. Currently, a large number of electronic devices, both small and large, use LED displays as a screen and as an interaction medium between the user and the system. Modern electronic devices such as mobile phones, TVs, tablets, computer monitors, laptops screens, etc., use a LED display to display their output.

LED Display is one of the main screen displays that are being commercially used. The biggest advantage of the LED display is its efficiency and low-energy consumption, which is especially needed for handhelds and chargeable devices such as mobile phones and tablets. An LED display consists of several LED panels that, in turn, consist of several LEDs.

LEDs have numerous advantages over other light-emitting sources that can be used alternatively. Aside from being power efficient, LEDs produce more brilliance and greater light intensity. LED Display is different from the vacuum fluorescent display used in some consumer electronics such as car stereos, videocassette recorders, etc., and, hence, these two should not be confused with each other.

There are three types of touchscreen technology:

A plasma screen or plasma display is a television, usually larger, ranging from 40-inches to 65-inches. Other sizes may be available but are less common. Plasma screens are similar to LCD and LED monitors in that they are flat-panel, thin, and capable of being mounted on a wall. A plasma screen is made up of many tiny cells containing noble gases and a tiny amount of mercury.

These cells are between two pieces of glass and electricity is passed through the cells, causing the gases to turn into plasma. Light is then emitted, generating a picture on the screen. Plasma screens support high resolutions of up to 1920 x 1080, have excellent contrast ratios, wide viewing angles, and high refresh rates that reduce video blur. They are excellent for fast-action movies and sports games and overall provide for an excellent viewing experience.

The next on the list of type of monitor is the OLED monitor. The acronym ‘OLED’ stands for Organic Light-Emitting Diode – a technology that uses LEDs in which the light is produced by organic molecules. These organic LEDs are used to create what are considered to be the world’s best display panels.

OLED displays are made by placing a series of organic thin films between two conductors. When an electrical current is applied, a bright light is emitted. A simple design – brings with it many advantages over other display technologies.

OLEDs enable emissive displays – which means that each pixel is controlled individually and emits its light (unlike LCDs in which the light comes from a backlighting unit). OLED displays feature great image quality – bright colors, fast motion, and most importantly – very high contrast. Most notably, “real” blacks (that cannot be achieved in LCDs due to the backlighting). The simple OLED design also means that it is relatively easy to produce flexible and transparent displays.

OLEDs are mostly used today in mobile devices – many high-end smartphones use them. Over 500 million OLED panels are produced annually, by various display makers, and the market is growing as OLEDs offer better image quality, smaller form factors, and flexibility – things that are hard to achieve with LCDs. It is expected that by 2022, over a billion OLED panels will be produced annually.

OLEDs can also be used to make TVs – some of the world’s top TV panels are produced based on innovative OLED technology. Various TV makers use OLED technologies to produce award-winning premium OLED TVs with outstanding image quality and ultra-thin form factors.

Shortly, other players are expected to join this market with new technologies – such as ink-jet printed OLEDs and quantum-dot hybrid OLEDs.

What is a computer monitor?

A monitor is an electronic output device that is also known as a video display terminal (VDT) or a video display unit (VDU). It is used to display images, text, video, and graphics information generated by a connected computer via a computer’s video card. Although it is almost like a TV, its resolution is much higher than a TV.

What are the different types of computer monitors?

A monitor is an electronic output device that is also known as a video display terminal (VDT) or a video display unit (VDU). In the beginning, only one type of monitor (CRT monitor) was used in computers. Nowadays different types of computer monitors are used and each of the types has its own advantages and limitations.