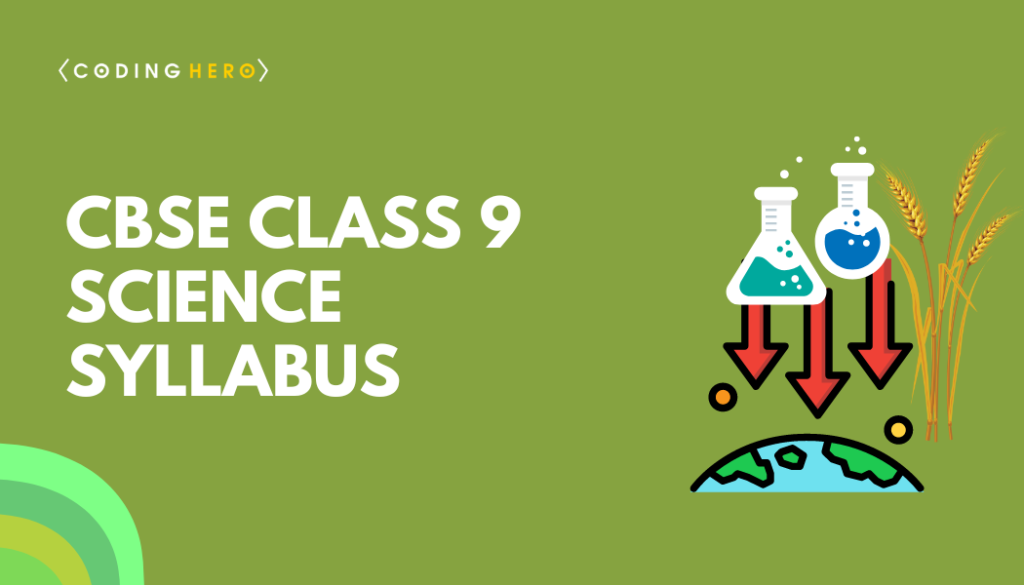 The Central Board of Secondary Education (CBSE) has released the revised 9th class Science syllabus for the upcoming academic session for the year 2022-23. The syllabus provides students with a strong foundation in basic science concepts and skills. The topics covered in the syllabus include Nature and Behaviour of Matter, Organization in the Living World, Motion, Force and Work, and Food Production.

The science syllabus for class 9 is designed in such a way that it forms the foundation for the all-important board exams and competitive exams in the upcoming years. Without mastering these concepts first, you will not be able to ace those exams. For example, when it comes to Carbon and its Compound in class 10, you learn the concepts of the Structure of Atoms and Molecules in class 9. This means, that if your science concepts are strong in class 9 itself, class 10 gets much easier!

Chapter 1: Matter in Our Surroundings

An element in chemistry is a substance that cannot be broken down into other substances. Carbon, hydrogen, oxygen, etc., are all elements. You will learn about different how compounds are formed by the process of chemical reactions and their physical and chemical properties. A compound is a substance made up of two or more different chemical elements combined in a fixed ratio.

In the first chapter, you were introduced to the concept of matter. In this chapter of the CBSE class 9 science syllabus, you will learn about the basic building blocks of molecules, i.e., atoms. This chapter describes the rules that are followed when atoms of different elements combine to form compounds and their chemical properties.

The discovery of atoms was a revolutionary beginning to a new and detailed world of Science. Although a minute entity,  it constitutes important constituents – electrons, protons, and neutrons. In this chapter, you will understand the basic  structure of an Atom. The chapter will take you through important topics like the fundamental constituents of an atom, different models of an atom, distribution of electrons, valencies, atomic number, and mass number.

All life on earth, no matter its size, is composed of basic units called cells. Cells are considered the basic units of life in part because they come in discrete and easily recognizable packages. In this chapter, you will learn about the structure of a cell and its different components commonly known as organelles.

The cells combine to form a tissue. Tissues in turn form organs and different organs together form a different organ system that performs different types of functions required for the survival of an organism. In this chapter, you will learn the basic structure of plant and animal tissues and how tissues form different organs.

Motion is all around us, from moving cars to flying aeroplanes. Motion can have different features like speed, direction, acceleration, etc. In this chapter, we will understand these features in detail and see how they can help us predict the future of these moving things.

In Physics, force is defined as a push or pull on an object with mass that causes it to change its velocity. In this chapter of the CBSE class 9 science syllabus, you will learn about three basic laws governing the motion and forces we observe in this universe. These laws are commonly known as Newton’s laws of motion.

The tendency of an object to rise up to the upper levels of the fluid or to float on the fluid surface is known as floatation.

In the previous few chapters, you learned about ways of describing the motion of objects, the cause of motion, and gravitation. Another concept that helps us understand and interpret many natural phenomena is ‘work’. Closely related to work are energy and power. In this chapter, you will learn these concepts.

Every day we hear sounds from various sources like humans, birds, bells, machines, vehicles, televisions, radios, etc. A sound is a form of energy that produces a sensation of hearing in our ears. You have learned about the conservation of energy, which states that we can neither create nor destroy energy. We can just change it from one form to another. When you clap, a sound is produced. In this chapter, you will learn how sound is produced and how it is transmitted through

a medium and received by our ears.

You know that all living organisms need food. Food supplies proteins, carbohydrates, fats, vitamins, and minerals, all of which we require for body development, growth, and health. Both plants and animals are major sources of food for us efforts are always being made to improve production from agriculture and animal husbandry. In this chapter of the CBSE class 9 science syllabus, you will learn about different methods of food production and its management.

The unit-wise distribution of marks for the class 9 science syllabus is as follows.

Unit I: Matter – Its Nature and Behaviour(Theme: Materials)

Unit II: Organization in the Living World(Theme: The World of the Living)

Practicals should be conducted alongside the concepts taught in theory classes.

3. Perform the following reactions and classify them as physical or chemical changes: Unit-I

4. Preparation of stained temporary mounts of (a) onion peel, (b) human cheek cells & to record observations and drawing their labeled diagrams. Unit-II

7. Verification of the Laws of reflection of sound. Unit-III

8. Determination of the density of solid (denser than water) by using a spring balance and a measuring cylinder. Unit-III

9. Establishing the relation between the loss in weight of a solid when fully immersed in Unit-III

10. Determination of the speed of a pulse propagated through a stretched string/slinky (helical spring). Unit-III

11. Verification of the law of conservation of mass in a chemical reaction. Unit-III

If you are looking for the best Science reference books for Class 9 CBSE, then this list is for you. Here we have listed some of the best Science books that will help you score high marks in your exams. These books cover the entire science 9 class Science syllabus and are a great resource for students who want to excel in this subject. In this list, we will recommend three of the best science reference books for 9th grade students who are following the CBSE curriculum.

Books Prescribed For Class 9 By CBSE

What are the different chapters included in the syllabus of Class 9 Science?

There are thirteen chapters in the syllabus of Class 9 Science. These are Matter in Our Surroundings, Nature of Matter, Particle Nature and Their Basic Units, Structure of Atom, Cell – Basic Unit of Life, Tissues, Organs, Organ System, Organism, Motion, Force and Newton’s Laws, Gravitation, Floatation, Work, Energy and Power, Sound, Food Production and Management.

What are the various marks distribution in Class 9 Science Syllabus?

The marks distribution for different units in the class 9 science syllabus is
Matter – Its Nature and Behaviour – 25
Organization in the Living World – 22
Motion, Force and Work – 27
Food and Food Production – 06

Is science divided in Class 9?

The science question paper for Class 9 is not divided on the basis of Physics, Chemistry, and Biology. There is only one question paper. But it is divided into two sections, i.e., theory and practical.

Class 9 is an important class for students as it is the foundation for their future studies. In order to help students perform well in their exams, the CBSE has released the Science Syllabus for Class 9. The syllabus covers all the important topics that will be taught in Class 9.

Based on the CBSE class 9 Science syllabus, we have created this detailed and beautiful PDF which you can download and refer to anytime. This PDF not only covers the full list of chapters and topics within each chapter, but it also has a list of resources that parents, teachers, and students will find very helpful. So, go ahead and download this CBSE Science Syllabus For Class 9 PDF.

The CBSE 9th Class Science Syllabus has been designed to provide a strong foundation in the subject and prepare students for higher-level courses.

The syllabus covers a wide range of topics, from Matter in Our Surrounding to Particle Nature in Chemistry, Cell to Tissues and Organ System in Biology, and Laws of Motion to Gravitation in Physics.

Overall, the CBSE 9th Class Science Syllabus provides a well-rounded education in science that will give students the skills they need to succeed in higher-level courses. Table of Contents Best Sci Fi Movies for Kids1. Aliens in the END_OF_DOCUMENT_TOKEN_TO_BE_REPLACED