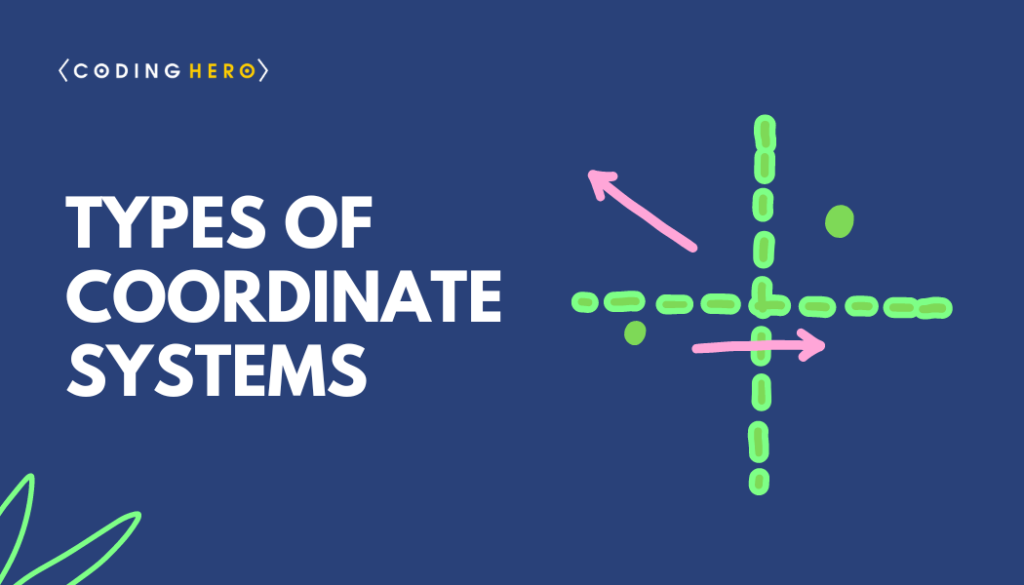 In geometry, a coordinate system is a system that uses one or more numbers, or coordinates, to uniquely determine the position of the points or other geometric elements on a manifold such as Euclidean space. The order of the coordinates is significant, and they are sometimes identified by their position in an ordered tuple and sometimes by a letter, as in “the x-coordinate”. The coordinates are taken to be real numbers in elementary mathematics but may be complex numbers or elements of a more abstract system such as a commutative ring. The use of a coordinate system allows problems in geometry to be translated into problems about numbers and vice versa; this is the basis of analytic geometry.

Most of us are familiar with the Cartesian coordinate system and have used it in plotting points and graphing equations. But there are many other coordinate systems that are widely used in Mathematics and other fields.

Cartesian Coordinates in a Plane

In the Cartesian coordinate system, the x-coordinate specifies the distance to the right (if x is positive), or to the left (if x is negative) of the y-axis. Similarly, the second number y is called the y-coordinate (or y-component), as it is the signed distance from the origin in the direction along the y-axis. The y-coordinate specifies the distance above (if y is positive) or below (if y is negative) the x-axis. In the following figure, the point has coordinates (-3, 2), as the point is three units to the left and two units up from the origin.

In three-dimensional space, the Cartesian coordinate system is based on three mutually perpendicular coordinate axes: the x-axis, the y-axis, and the z-axis. The three axes intersect at the point called the origin. You can imagine the origin being the point where the walls in the corner of a room meet the floor.

Angles in polar notation are generally expressed in either degrees or radians (2π = 360o). Degrees are traditionally used in navigation, surveying, and many applied disciplines, while radians are more common in mathematics and mathematical physics.  In many contexts, a positive angular coordinate means that the angle ϕ is measured counterclockwise from the axis.  In mathematical literature, the polar axis is often drawn horizontally and points to the right.

The polar grid is scaled as the unit circle with the positive x-axis now viewed as the polar axis and the origin as the pole. The first coordinate r is the radius or length of the directed line segment from the pole. The angle 𝛳 measured in radians indicates the direction of r. We move counterclockwise from the polar axis by an angle of 𝛳. Even though we measure 𝛳 first and then r, the polar point is written with the r-coordinate first. For example, to plot the point (2, π/4), we would move π/4 units in the counterclockwise direction and then a length of 2  from the pole.

The real projective plane can be thought of as the Euclidean plane with additional points added, which are called points at infinity and are considered to lie on a new line, the line at infinity. There is a point at infinity corresponding to each direction (numerically given by the slope of a line), informally defined as the limit of a point that moves in that direction away from the origin. Parallel lines in the Euclidean plane are said to intersect at a point at infinity corresponding to their common direction.

Important points about a homogeneous coordinate system are:

Curvilinear coordinates are often used to define the location or distribution of physical quantities which may be, for example, scalars, vectors, or tensors. Mathematical expressions involving these quantities in vector calculus and tensor analysis (such as the gradient, divergence, curl, and Laplacian) can be transformed from one coordinate system to another, according to transformation rules for scalars, vectors, and tensors. Such expressions then become valid for any curvilinear coordinate system.

Log-polar coordinates in the plane consist of a pair of real numbers (ρ,θ), where ρ is the logarithm of the distance between a given point and the origin and θ is the angle between a line of reference (the x-axis) and the line through the origin and the point.

and the formulas for transformation from log-polar to Cartesian coordinates are x=e⍴cos𝜃 and y=e⍴sin𝜃By using complex numbers (x, y) = x + iy, the transformation can be written as x+iy=e⍴+i𝜃

In geometry, a barycentric coordinate system is a coordinate system in which the location of a point is specified by reference to a simplex (a triangle for points in a plane, a tetrahedron for points in three-dimensional space, etc.). The barycentric coordinates of a point can be interpreted as masses placed at the vertices of the simplex, such that the point is the center of mass (or barycenter) of these masses. These masses can be zero or negative; they are all positive if and only if the point is inside the simplex.

Barycentric coordinates are particularly useful in triangle geometry for studying properties that do not depend on the angles of the triangle, such as Ceva’s theorem. In computer-aided design, they are useful for defining some kinds of Bézier surfaces.

What are the different types of coordinate systems?

Is a number line a type of coordinate system?

Table of Contents Best Sci Fi Movies for Kids1. Aliens in the END_OF_DOCUMENT_TOKEN_TO_BE_REPLACED