2 Types of Expressions – Postfix and Prefix. Master Rules to Convert. 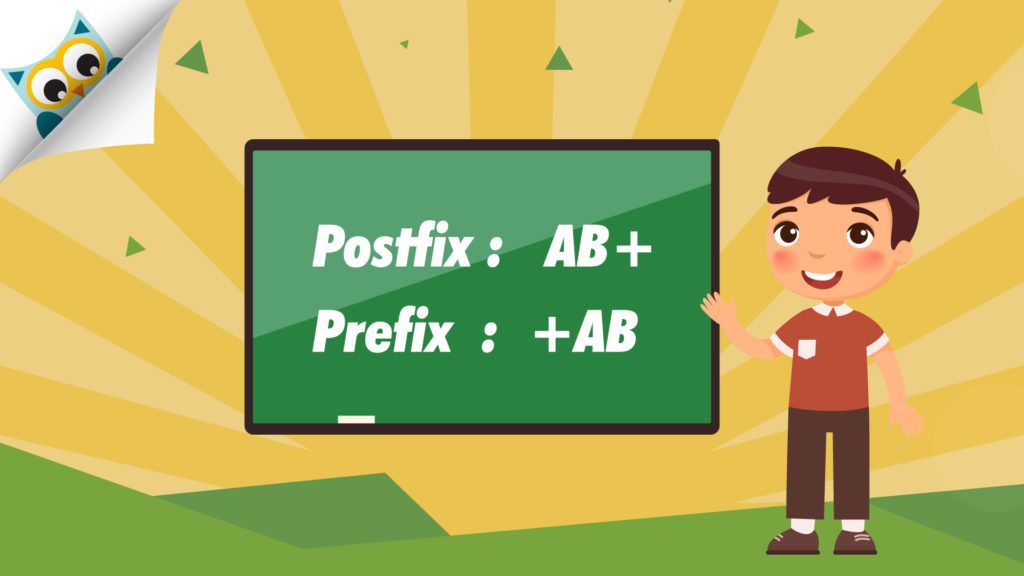 What is an Arithmetic Expression?

Remember that syntax means the rules for putting together a correctly formed statement. Arithmetic expressions are parts of statements, so must follow syntax rules to be correct.

2 Types of Expressions – Postfix and Prefix: Rules for Evaluating Expressions

The following are the rules for evaluating an arithmetic expression:

What are Infix, Postfix, and Prefix Notations?

Infix, Postfix, and Prefix notations are three different but equivalent ways of writing expressions. It is easiest to demonstrate the differences by looking at examples of operators that take two operands. Let’s consider two operands X and Y with one operator ‘+’.

Operators are written in-between their operands. This is the usual way we write expressions.

Operators are written after their operands.

Operators are written before their operands.

An expression such as A * ( B + C ) / D is usually taken to mean something like: “First add B and C together, then multiply the result by A, then divide by D to give the final answer.”

Infix notation needs extra information to make the order of evaluation of the operators clear: rules built into the language about operator precedence and associativity, and brackets ( ) to allow users to override these rules. For example, the usual rules for associativity say that we perform operations from left to right, so the multiplication by A is assumed to come before the division by D. Similarly, the usual precedence rules say that we perform multiplication and division before we perform addition and subtraction.

The order of evaluation of operators is always left-to-right, and brackets cannot be used to change this order. Because the “+” is to the left of the “*” in the example above, the addition must be performed before the multiplication.

Because Postfix operators use values to their left, any values involving computations will already have been calculated as we go left-to-right, and so the order of evaluation of the operators is not disrupted in the same way as in Prefix expressions.

The expressions given above are equivalent to / * A + B C D.

As for Prefix, operators are evaluated left-to-right and brackets are superfluous. Operators act on the two nearest values on the right. I have again added (unnecessary) brackets to make this clear: (/ (* A (+ B C) ) D)

In all three versions, the operands occur in the same order, and just the operators have to be moved to keep the meaning correct. (This is particularly important for asymmetric operators like subtraction and division: A – B does not mean the same as B – A; the former is equivalent to A B – or – A B, the latter to B A – or – B A).

Converting Between These Notations

The most straightforward method is to start by inserting all the implicit brackets that show the order of evaluation e.g.:

You can convert directly between these bracketed forms simply by moving the operator within the brackets e.g. (X + Y) or (X Y +) or (+ X Y). Repeat this for all the operators in an expression, and finally remove any superfluous brackets.

Table of Contents Best Sci Fi Movies for Kids1. Aliens in the END_OF_DOCUMENT_TOKEN_TO_BE_REPLACED